Studying logics via semantics is a well-established and very active branch of mathematical logic, with many applications, in computer science and elsewhere. The area is characterized by results, tool and techniques stemming from various fields, including universal algebra, topology, category theory, order, and model theory. The program of the conference TACL 2015 will focus on three interconnecting mathematical themes central to the semantical study of logics and their applications: algebraic, categorical, and topological methods. This is the seventh conference in the series Topology, Algebra and Categories in Logic (TACL, formerly TANCL). Earlier instalments of this conference have been organized in Tbilisi (2003), Barcelona (2005), Oxford (2007), Amsterdam (2009), Marseilles (2011), and Nashville (2013).

Contributed talks can deal with any topic dealing with the use of algebraic, categorical or topological methods in either logic or computer science. This includes, but is not limited to, the following areas:

Any queries for the Programme Committee (such as usage of the EasyChair conference system, abstract submission guidelines, conference programme, etc.) should be sent to

Queries for the local Organising Committee (registration, hotel accommodations, financial support and reimbursements, technology infrastructure, etc.) should be sent to 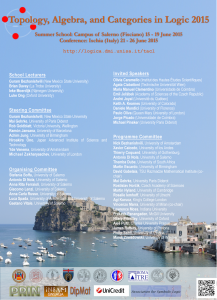